Number of Visits to The Chronicles

The exciled Nyudrev dynasty has a long standing military tradition. The fathers and sons, uncles and nephews have fought on Europes fields of battle for many centuries. Sometimes as mercenaries, sometimes for a just cause. Sometimes side-by-side, sometimes as sworn enemies. Through me, the last descendant, they tell their story and I, Pjotr Nyudrev, mine.

People who find my blog worthwhile

Here I get my inspiration

Pjotr
I’m a fifty-six year young family man, finally having taken up a lifelong interest in history and wargaming and plastic modeling as hobbies a couple of years ago. My main effort will be modelling armies and gaming with them, occasionally reporting through this blog to anyone who’s interested in my tabletop adventures.

It all started bout two months ago when I was looking for inspiration and examples for the 42mm project I introduced in my last post, I found a number of lots of 54mm Britains Toy soldiers for sale at  very resonable price. I almost bought a number of boxes, but even at those give away prices, it would have been a serious investment. And then...

I was googling around for alternatives and I came upon Armies in Plastic 1/32 toy soldiers. And then I found a Belgian dealer, good prices and easy on P&P. I needed a plan, other than buying toy soldiers to play Little Wars, or maybe Glossy Coats and Shiny Bayonets style gaming.
Not much worried about the historical context, I ordered some boxes to make a blue/grey army and a khaki/red army. The reasoning was I could paint them in the 70's Britains Deetail style...just the weapons, skin and some details...the soldiers' plastic would be the main uniform colour. 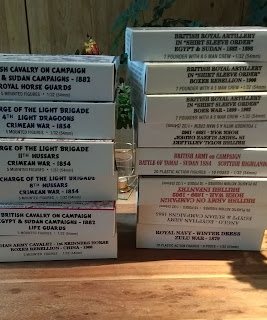 Right, step 1 finished. Now I needed some kind of setting to do some mini campaining à la One-Hour Wargames (by Neil Thomas, nice little book, rules might just work for some 54mm gaming). I settled on a Crimea / Balaclava inspired setting where one force is harassing the outer perimeter of a beseiging army. They are the advance forces of the army that is trying to link up with encircled Petropolis. The skirmishes and at first smaller engagements are happening in the Table Valley and Wood Valley. That settled, the brave little toy soldiers need something to fight over.


Then  I found some cardboard boxes and made some rough and ready buildings:

And there you have it, humble beginnings.

Now let me share this with you, Paul supported me to restart this blog, only for me to discover that he is way ahead of me. I forgot to ask him what rules he uses for his games. Maybe we should have a game together.

I'm so very lucky to be able to do all this, must keep the momentum up...the armies need to be ready for the grandchildren to play with, granddaughter is three and a half , grandson is minus two weeks, ETA 2nd July...

Last in, first out

Indeed, let's start with my last finished project, just to get started.
I've always been in love with toy soldiers, especially the old "Little Wars" style castings and also with the Britains Deetail range of plastic soldiers.
I was looking for an original gift for a fellow retired officer of cavalry. The unit he grew up in and where his heart is, is the Belgian 4e Regiment Lansiers (4th Lancers Regiment). Then it struck me: why not paint up some glossy toy soldiers as Belgian  lancers? And the I thought: well, why not present them in a box, as if they where made by some toy soldier manufacturer?
And so I did...
In the Britains boxes of four cavalry, you also had a trumpeter or standard bearer and an officer, so I made up those. The officer arm was a bit awkward as it had a hand stifly extending from the arm, so I had to sculpt on a light cavalry sword.
The miniatures where finished in Coat d'Armes paint and a coat of Windsor and Newton gloss varnish. The main colours per instructions where royal blue, golden yellow and sky blue. I'm quite happy with the "paint conversion", which is in the spirit of the old toy soldiers.
Next I wanted the box the have that retro look, so I copied the Britain's style boxes. I did however insert text on the inside of the lid, as I thought it would be a good backdrop when displaying the toys.
I think I just might do a couple more sets like this, just for fun.
There you have it,  a first careful post, maybe the start of a renewed regular sharing of my leasure time activities.
As always,
Happy Gaming,
Pjotr
Posted by Pjotr at 15:25 8 comments:

Is anybody out there?

Well, is there?
Just checking, I might just fire up The Chronicles, slowly but surely, as more hobby time is created. But then only if someone is listening.
Happy Gaming
Pjotr
Posted by Pjotr at 22:46 2 comments:

The past in a nutshell

So, getting back into it. A number of “dead” links have been removed. T thought some of you might be wondering what I’ve been up to last couple of eons…

So what -whilst being away from the Chronicles- did I do…wargaming wise.
There certainly were a number of memorable  activities.

What stands out is attending an “Old school “ Waterloo wargame on the 17th of June 2015 at the “Le 1815” hotel,  a mere 100 yards from Wellingtons famous Elm tree location. And  of course, two days later, attending the reenactment on the Waterloo battlefield. I must say there was a rather large crowd attending the 200th get together of the Waterloo veterans. Pictures are AWOL.
The Fridays following that event I took command of Grouchy’s troops in another Waterloo game using Blucher  Napoleonic rules. Again,  can't find the pictures right now, to be continued....

Another game that stuck with me is when I took  command of a cavalry wing in a WSS game and totally trashed the enemy cavalry and then maneuvered into position  to attack the enemy infantry lines in the flank (battle report).

And there was this game that was set during the Crimean war. I took command of the Russian troops and after blocking an Anglo-French all but destroyed the Anglo part of the adversary in a well-coordinated counterattack. The write up of the battle says the dice were responsable for the Russian victory rather then superior generalship. You should take the writings of war correspondends with a pinch of salt.

In the mean time I’m assembling and (still busy) painting a small Dutch-Belgian 100 Days contingent in 28mm, of which the Dutch militia already fought at Waterloo on the 17th of June 2015. Again,  I'll try and get hold of the pictures.

In the mean time a lot of time is going to a four year course I'm following. I'm learning how to restore old documents and paper based works. I'll probably end up specialising in etchings and engravings of  battle scenes, maps and fortification maps. More on that much later.
A special mention to the fellow gamers at The Wargamorium for having me join their games.

As ever,
Happy Gaming

My first task will be to clean up the blog, i.e.: remove dead links, update sites I follow, introduce new favourites, etc...In short: do some long due maintenance.

....a blog?
I've forgotten about this.
No, not really...
I'll have a think about the Chronicles, and then see what will happen.

CQMS and a prize

Still tinkering with the blog and a grand prize for my 50th member / follower.

Indeed, I deleted a number of less important links and added a few new ones which have caught my interest. Have a look.

And then there is my 50th member / follower and he wins a prize: lifelong member- and followship to the Nyudrev Chronicles for FREE. Yes...free, gratis, gratuit, and that for as long as he lives or less long than that if that person should outlive me. For reasons of discretion and privacy the 50th follower has been personally contacted by me on his Parum Pugna blog of his title of Honorary Follower of the Followship of the Blog.

Just to keep everybody interested: the 100th follower will also receive a signed picture of my dog (signed by me, not the dog).